Golden Retrievers are wonderful dogs!  But do male goldens differ from female goldens?  In this article male vs female Golden Retriever, you will find out how the two sexes differ, plus the reasons why I chose a female.

Just over 4 years ago my husband and I decided to get a puppy. We had recently moved into our new house and wanted to add a dog to our family of just the two of us.

I have always loved Golden Retrievers, and we decided that was the breed for us. After researching, we were able to find a reputable breeder that was going to have puppies available in a couple of months. That was a great time frame for us, and our next decision had to be gender. Do we get a male or a female Golden Retriever?

Several factors went into our decision, and we chose a female Golden Retriever, and never looked back!

Some of the reasons for our decision are explained below.

Females Tend To Be Calmer 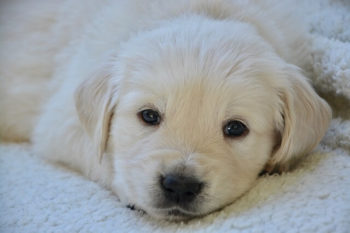 This was going to be our first dog, so we wanted to go with a female because we had heard from other dog owners that females tend to be calmer and less hyper than males.

In general, both male and female Golden Retrievers have a calm and friendly temperament and are not considered to be a hyperactive breed.

Female dogs generally mature mentally faster than males do.  A 1-year-old female acts like a 1 1/2 – 2-year-old male. Males have a longer puppy stage.

Golden Retrievers are slow to mature compared to other breeds, and they display that playful silly personality of a puppy sometimes into their senior years.

As far as females being calmer than males, who really knows? It is like saying that all women are calmer than men. This is simply not true.

I can tell you this, my female puppy was not calm. She was so hyper and full of energy and playfulness that she was hard to keep up with, and definitely a handful.

I remember a time when she was so wild my husband had to lock himself in the bedroom just to get away from her until she calmed down. (She waited outside of the door for him). He is the one that has always “roughhoused” with her from the start, and I guess the one time he just couldn’t take it LOL.

Another instance is when she would do laps inside the house and run up and down the stairs and then take a running leap onto the couch. Or when we had fresh sod laid down in our backyard, and she grabbed a piece of it and ran into the house with it.

The joys of puppyhood! I would say she calmed down quite a bit at the age of 1, she was spayed at around 6 months and that helped.

Now we have a beautiful, sweet loving and calm dog, that is not to say that she wasn’t that from the beginning, but boy was she a handful.

So if there is any truth behind females being calmer, I would hate to see what a male would be like. 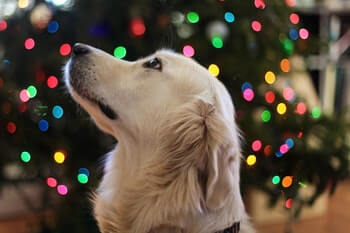 As a first dog, we wanted one that was independent, and not always clinging to us.

Some say that male dogs are more affectionate and needy, often described as goofy and big teddy bears, while females are also affectionate but more on their own terms. They will want to be petted, but then display their independence and walk away when they’ve had enough.

A lot of dog owners have stated that male Goldens are in love with you, and female Goldens want you to love them. I do not have experience with a male Golden, but because I have a female Golden I can totally agree with this statement.

My female is very affectionate but wants all the affection drawn on her. She will sit by your feet and will look up at you and expect to be petted. We have nicknamed her “Diva” because she is very much a Diva.

She expects us to bring her water while she is resting on the couch, and we have to raise the water bowl up to her so she can drink. Is this for real? you might ask, yes it is. We love her so much and she is so spoiled, I think she has trained us well. You might even say that she owns us.

As far as females being more independent than males, that is just a generalization. Although my female wants to be petted on her terms, she does have a need to be with us at all times.

In general females of the same litter and breed will be smaller than males. Males grow to be taller and heavier than females.

The above sizing is just a generalization, and it can vary depending on the size of the parents. Some females can be larger than some males of a different litter, it all depends on genetics.

This is really what I thought! I was a total newbie. I thought only male dogs hump your leg, boy was I wrong.

I guess this is one of the biggest misconceptions about dog behaviour, that females don’t try to hump people, other dogs or things. Both males and females hump, even after they are neutered or spayed.

While leg humping is embarrassing and awkward for dog owners, especially when your dog does it in front of people, it is completely normal and common.

My female dog as a puppy would hump her stuffed toys and my leg. She has been spayed, and still on occasion humps my leg, usually after playing. I see it as a way of her releasing her excess energy after she is excited.

Neutering and spaying a dog will usually decrease the humping. Also, trying to distract your dog when he/she tries to hump will help, as well as training methods to correct the behaviour.

There are many reasons why people prefer female dogs over male dogs or vice versa, but as far as owning a Golden Retriever, I believe you can’t go wrong with either sex.

There may be slight differences in temperament between a male and female, but both sexes are known to be friendly, gentle, loving and intelligent.

When looking for any dog or puppy, male vs female should not be your only criteria, nor should it be the most important one. You need to consider personality, temperament, and health.

If you are going through a breeder you will want to find out how to choose the right puppy from a litter.

While the reasons above were some reasons I chose a female, none of them matter to me now. I am so in love with my female Golden, all of her quirks and perks, and I have never looked back.

Do you own a male or a female Golden Retriever?  What were some of your reasons for choosing either sex?

Perhaps you own both a male and female Golden Retriever and have noticed some differences?