The following are 10 things you may or may not know about this breed.

1. They Were Developed In Scotland

Lord Tweedmouth’s goal was to develop a hunting dog that could retrieve shot waterfowl from both water and land.  He wanted a dog that was active and powerful, but gentle and trainable.

The name “retriever” came from their ability to retrieve shot game undamaged, because of their soft mouth.

It wasn’t until 1925 that Golden Retrievers were recognized as an official breed by the American Kennel Club. 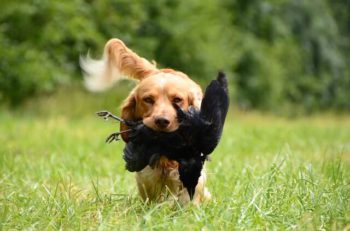 2. There Are 3 Types Of Golden Retrievers

You may think that all Goldens look similar, but this breed comes in various coat colours ranging from white to dark golden. There are also 3 types, all with subtle differences.

Also known as English Cream Golden.  This type of Golden is the lightest in colour, a white cream colour.

English Goldens are stockier than the other 2 types, with thicker coats and heavier bodies.  Their skull is broader and their body is more muscular.

The American Golden Retriever has a darker coat colour, is lankier, and less muscular than the other types.

Canadian Goldens stand taller than the other types, and their coat is thinner and darker in colour.

Regardless of the type of Golden, they all have a great temperament. They are known for their calm, playful and friendly disposition.

Golden Retrievers have appeared in movies and tv shows such as Air Bud, Air Buddies, and Homeward Bound, to name a few.

Because of their trainability, obedience, and gentle nature, Goldens are a popular choice.  The fact that they are beautiful and friendly helps too.

Golden Retrievers love having a job to do and will focus on any task given to them.  They have an eagerness to please their owners/handlers.

Because of their intelligence, trainability, willingness to learn, and their love of people, they make great working dogs.

Goldens have a keen sense of smell and tracking abilities, which make them great for search and rescue teams.

They are used for many important jobs, such as guide dogs for blind people, sniffing for drugs or bombs at airports, and because of their calm nature, they make great therapy dogs. 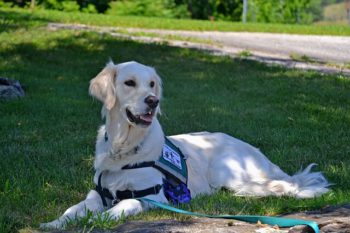 Golden Retrievers have a gentle and trusting disposition, which makes them horrible guard dogs.

However, they do make great watchdogs and will bark loudly at strangers. When a stranger comes to the door they will bark, but soon their tail will wag and they will become fast friends with the stranger.

6. They Love To Swim

Just try to keep them out of the water, I bet you can’t!

They will walk thru any puddle, regardless if it is mud, and they are always up for a game of fetch in the lake.

Their coats are water-repellent, and they have webbed feet, making them natural born swimmers. 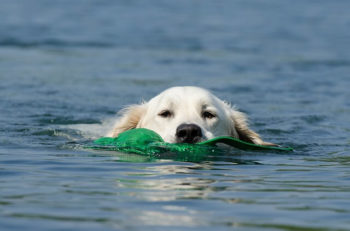 On average Golden Retrievers live 10-12 years, which is pretty common for large breed dogs.  Large breeds have a shorter lifespan than small breeds.

The sad news is that Goldens have a high rate of cancer when compared to other breeds.  Cancer is the number one killer, and Goldens are more susceptible to certain types of cancer.

Other common health problems that this breed is susceptible to include hip dysplasia, elbow dysplasia, cataracts, and skin diseases such as allergies and hot spots.

If you own a Golden it is best to be aware of their health problems, especially as they get older.  Find out what you can expect as your Golden Retriever ages.

8. They Are The 4th Most Intelligent Breed

Golden Retrievers are extremely smart.  In fact, they are considered the fourth most intelligent breed of dog according to Stanley Coren’s The Intelligence of Dogs.

Their intelligence is ranked based on obedience-command trainability.  The Border Collie, Poodle, and German Shepherd are the 3 breeds ahead of them in smarts.

Because of their intelligence, Golden Retrievers are quick to learn new things which makes training them easy.

Golden Retrievers are both intelligent and athletic, which means they need plenty of physical activity and mental stimulation to keep them from becoming bored and destructive.

9. They Are The 3rd Most Popular Breed In America

According to the American Kennel Club, Golden Retrievers are the 3rd most popular, following the Labrador Retriever, and German Shepherd.

Why are these dogs so popular?  Golden Retrievers are great family companions, they are loyal to their owners and have hearts of gold.

People love this breed because they are gentle, loving, athletic, and have a way of making you fall in love with them.

Golden Retrievers tend to mature slower than other dog breeds, and their playful silly behaviour will last into adulthood.

A Golden Retriever may reach physical maturity at the age of 2, but their social and behavioural maturity isn’t reached until the age of 3-4 yrs.

The benefit of having a slow maturing breed is that you get to enjoy the puppy stage a bit longer.

Both President Gerald Ford and Ronald Reagan were fond of this breed and owned a Golden Retriever.

I sure hope you enjoyed these cool facts about Golden Retrievers!

Did you learn something new about this breed?  How many cool facts did you know?